“Go And Do Something In The Economy,” H.E Gen Museveni Tells Retiring Army Officers 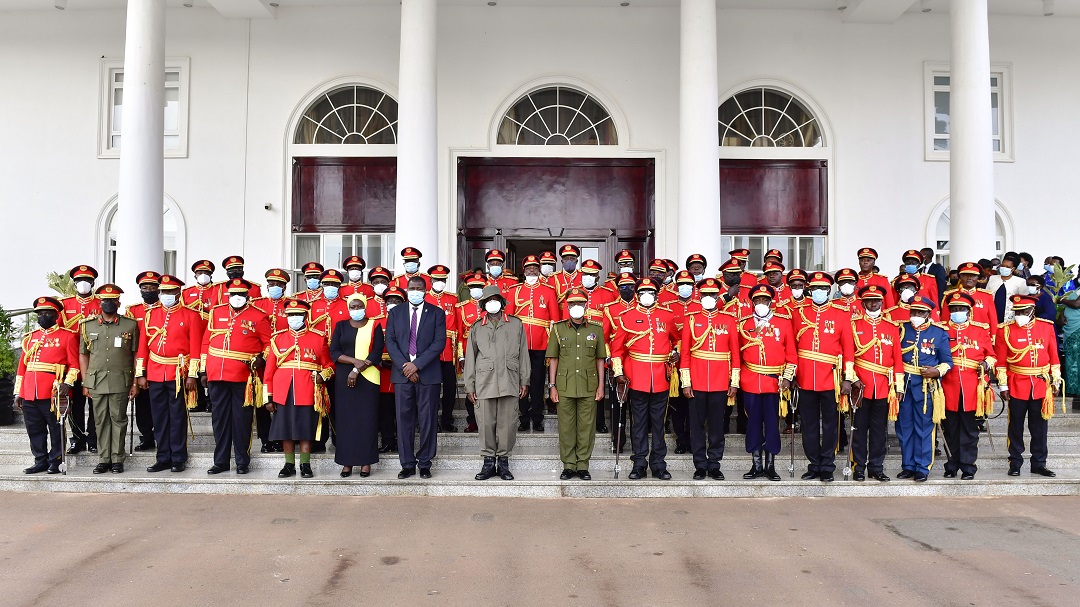 President Museveni (C) poses for a photo with UPDF generals who retired from the army during a function at State House Entebbe on Wednesday.

President Yoweri Kaguta Museveni, who is also the Commander In Chief (C-I-C) of the Uganda People’s Defense Forces (UPDF), has said army officers retiring from active service should use the opportunity to create wealth for themselves now that Government is able to send them off with some good remuneration.

“You have done army work. Now go and do something in the economy in these last years,” H.E Gen Museveni said.

H.E Gen Museveni was speaking at a ceremony to retire 48 General officers of the UPDF at State House, Entebbe. These were meant to be 49 before the death of Gen Elly Tumwine who breathed his last a few days ago at the age of 68.

Gen Museveni thanked the officers for accepting to work under difficult situations with no or low pay to a stage when the system is able to support them unlike in the previous armies where officers retired upon death.

“The army of 1971, many Acholi and Langi officers were killed by the Idi Amin group which was coming in. That was their retirement. Now when you are retiring, the country you supported is now a bit more able to also support you,” Museveni said, adding that this has made retirement a good gesture. He, however, cautioned the retiring officers not to listen to opportunists giving them advice on how they should spend their savings but rather invest wisely in commercial agriculture.

“So, my advice to Generals, please, buy yourselves land and practice the four -acre model of agriculture and venture into coffee, fruits, pasture for animals (zero grazing), food, chicken and pigs in the backyard, fishing near the swamps, etc.”

Among the notable retirees most of whom are part of the 1986 National Resistance Army (NRA) liberation group that brought the
current government into power include RO 00031 Gen David Sejusa who is a former Coordinator of Intelligence Services, and
Lt Gen Andrew Gutti, formerly Chairman of the General Court Martial.

Maj Gen George Igumba, the UPDF Chief of Personnel and Administration, informed the President that 267 senior officers at
the rank of Major to Colonel, who are part of batch 12, were seen off yesterday. 11 batches have been seen off since 2014 making a total of 9026 officers who have been retired since then.

Gen Igumba said this time for batch 12, the plan was to retire 2,539 personnel, including 75 General officers, 429 senior officers, 275 junior officers and 1,760 militants but the number was reduced tremendously to only 316 officers due to budgetary limitations.
“The category of Captain all the way to Private, were pushed to batch 13 in the financial year 2023/24 when their salaries will have been enhanced as we were reassured by you, your Excellency. Therefore, the current batch 12 retiring yesterday and today is an unprecedented one in the history of Uganda since independence and indeed since Uganda became a member of the United Nations, reaffirming Your Excellency’s resolve to professionalise the force in all aspects of military and defense development,” said Maj. Gen Igumba.

The most senior retiring officer, Gen Sejusa on behalf of retiring officers paid tribute to His Excellency the President for providing
leadership during the struggle, the army leadership and the people of Uganda without which there wouldn’t be peace. “I am proud to belong to NRA/UPDF, which has made incredible strides. I thank the people of Uganda from all regions for their
sacrifices. We all know there was a phase in our struggle when our civilian population was the vanguard. They were our eyes, the ears, our protectors. They fed us and this phase took a bigger part of 1981. They gathered intelligence, they carried out reconnaissance missions for us to acquire small arms and so on. If we did not have the population on our side, then there would be no NRA/UPDF and certainly NRM,” Gen Sejusa said, adding that it’s not easy to keep a country peaceful for 40 years.

Gen Sejusa noted that however much a lot has been done, a lot is yet to be achieved to consolidate the victories and the mission to liberate Africa. “Therefore, continue training, take advantage of the opportunities being provided, make sure that you deepen your ideological horizons but above all, love your nation and honor the people of Uganda always. They’re special people for there’s no greater honour than serving the people,” Gen Sejusa added.

He saluted the President for the opportunity to serve the people of Uganda and for the victories and achievements registered.

“We have shared a lot but we have served Uganda and I’m sure Uganda will prosper,” he added. The Chief of Defense Forces (CDF), Gen Wilson Mbasu Mbadi thanked the President for allowing the retiring officers to serve in various capacities and asked them to continue using their experience wherever they will go.

“Retirement is a golden gesture to release them when they’re still energetic. So, General officers retiring today, don’t just retire from UPDF; have something to retire to so that you can keep mentally alert, physically fit and productive,” Gen Mbadi said. 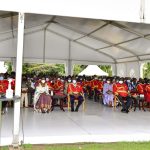 The CDF Gen Mbadi addressing the retiring generals at Entebbe on Wednesday. 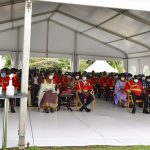 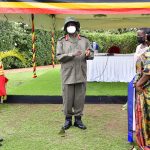 President Museveni talks to Brig Gen Senfuka and his family at Entebbe shortly after his retirment from the army. 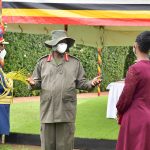 President Museveni talks to Brig Gen Rebecca Mpagi and her children at State House Entebbe on Wednesday shortly after she retired from the army. 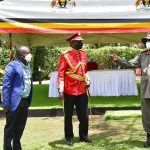 President Museveni chats with Gen Kashaka and his family members at State House Entebbe. Kashaka was one of the generals who retired from the Army on Wednesday. 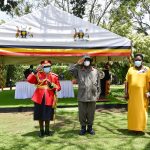 Lt Gen Proscovia Nalweyiso salutes President Museveni as she retired from the UPDF on Wednesday Aug 31. 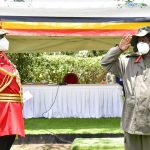 Gen Sejusa talks to President Museveni shortly after his retirement from the UPDF during the ceremony at State House Entebbe on Wednesday. 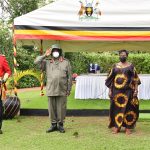 Brig Gen Omure and his family with President Museveni at State House Entebbe shortly after his retirement from the Army on Wednesday. 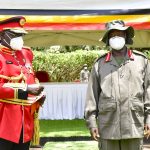 Gen Sejusa talks to President Museveni shortly after his retirement from the UPDF during the ceremony at State House Entebbe on Wednesday. PPU Photo (5) 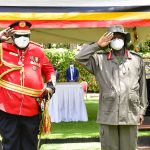 Gen Gutti salutes President Museveni during his retirement from the army on Wednesday.