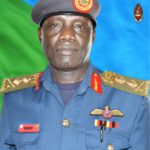 Staff at Wazalendo Savings and Credit Organization limited (WSACCO) headquarters in Kiwatule – Kampala, were advised to preserve discipline and exhibit ideological clarity so as to be elevated to higher ranks and responsibilities.

The Chief Executive Officer (CEO) for WSACCO Col Freddy Onata made this remark on 5th October 2021 at the SACCO headquarters while presiding over a promotion ceremony to recognize recently promoted Non-commissioned Officers (NCOs).

He noted that promotions are based on recognition of one’s capacity to execute duties, his/her discipline and sacrifice, and can aim at preparing an individual to handle another responsibility.

The CEO commended the UPDF fraternity for rewarding staff performance and encouraged the newly promoted NCOs to maintain discipline.

The Director Finance and Administration (DFA) at WSACCO Lt Col Yusuf Buha Magero encouraged the newly promoted staff to work harder. ” This is not a mere promotion; you need to reflect on what you do. There must be improvement in terms of discipline, planning, commitment and responsibility. Whatever task you do at WSACCO is a core task for UPDF,” said the DFA.

S/Sgt Tumukunde, who spoke on behalf of the promoted Non-Commissioned Officers applauded the UPDF leadership for recognizing their performance. He also thanked WSACCO for mentoring them into more valuable staff.