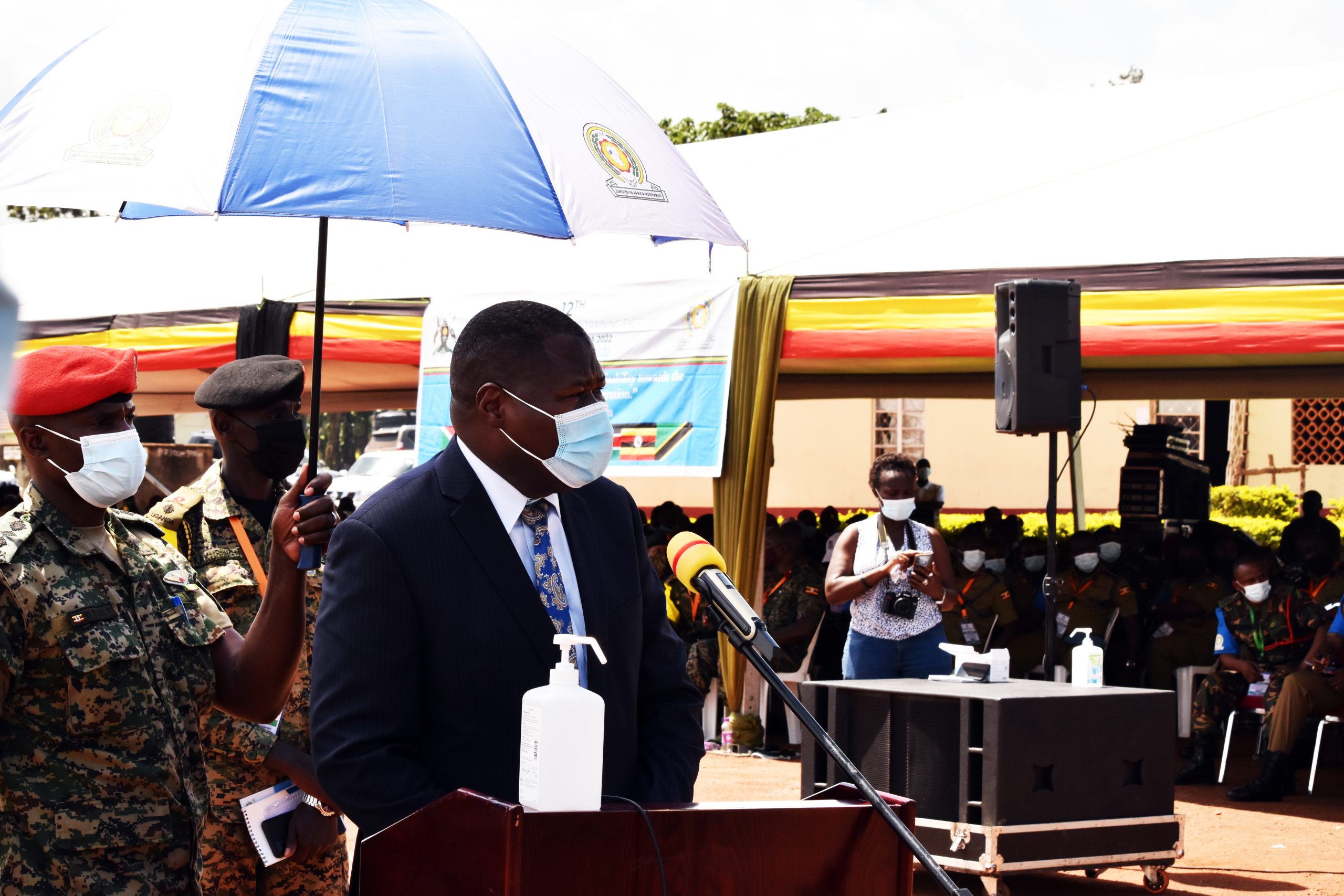 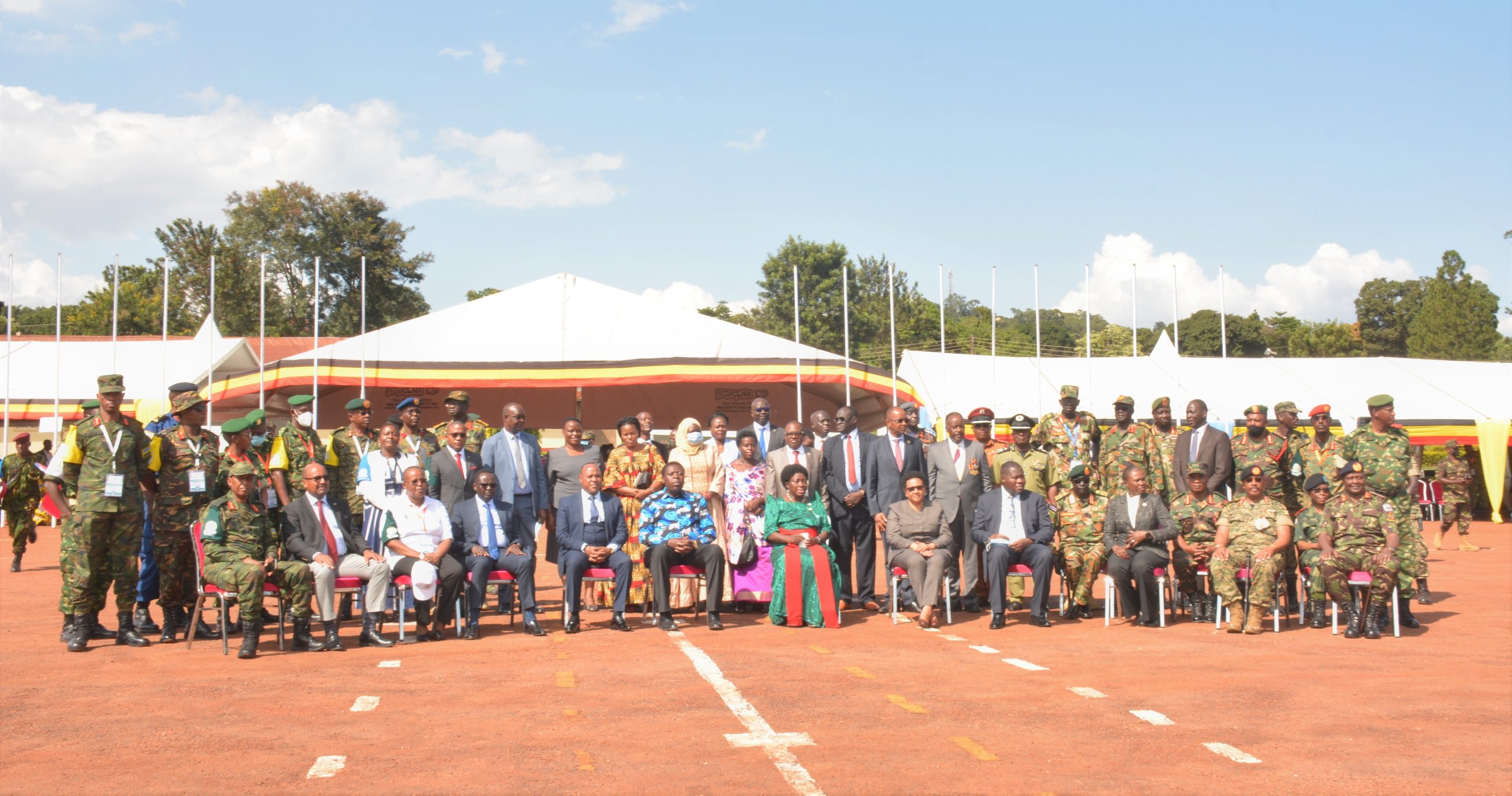 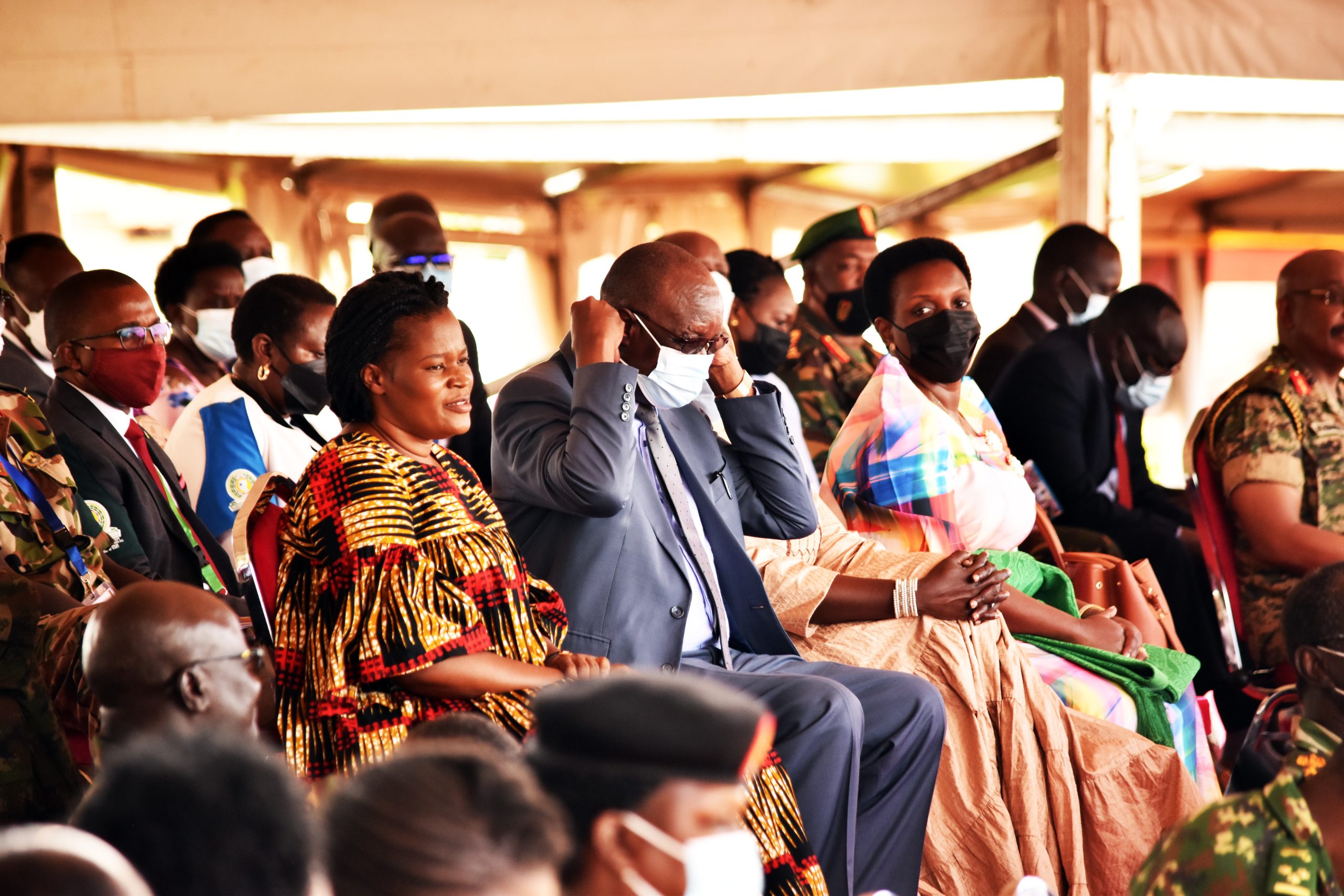 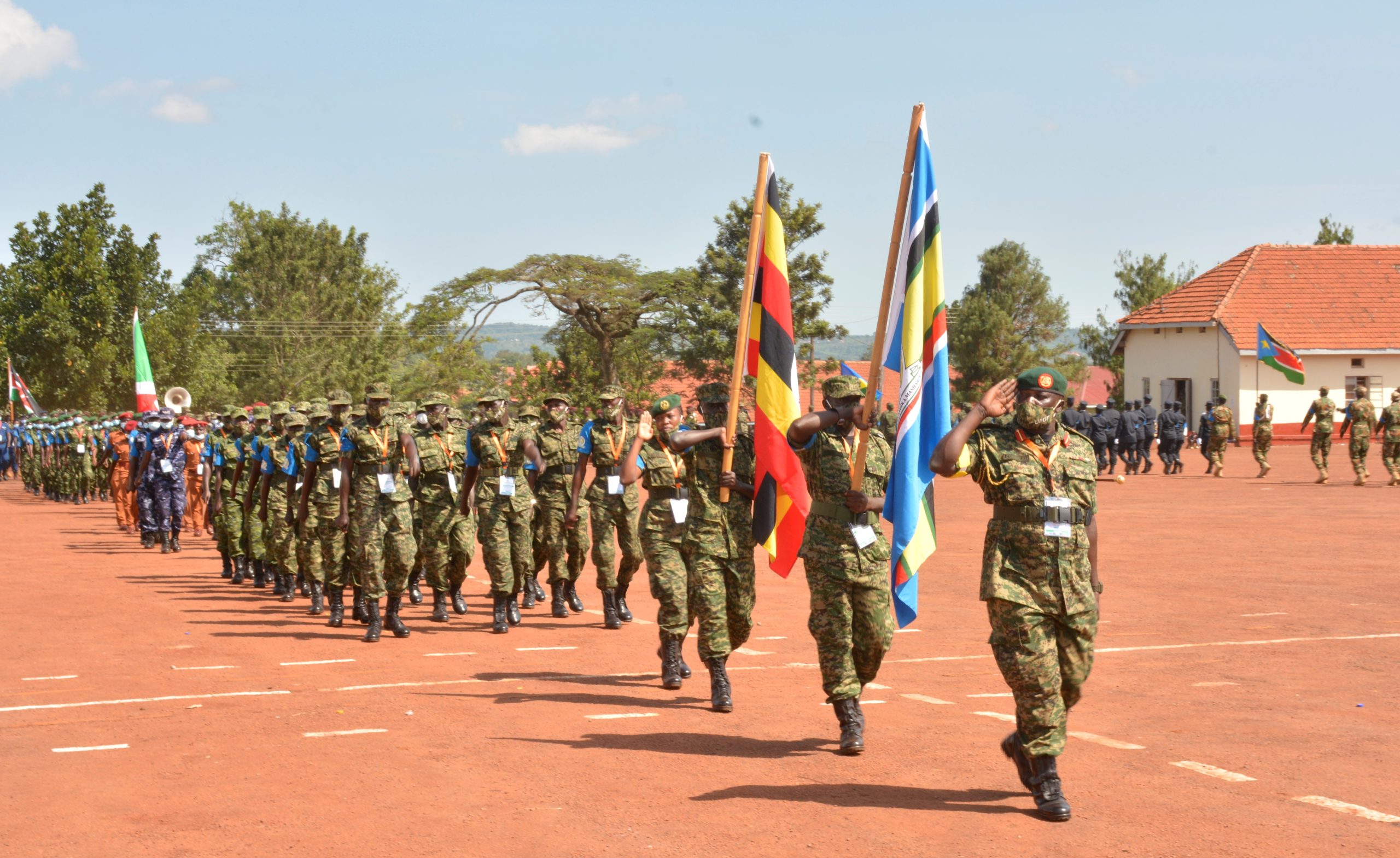 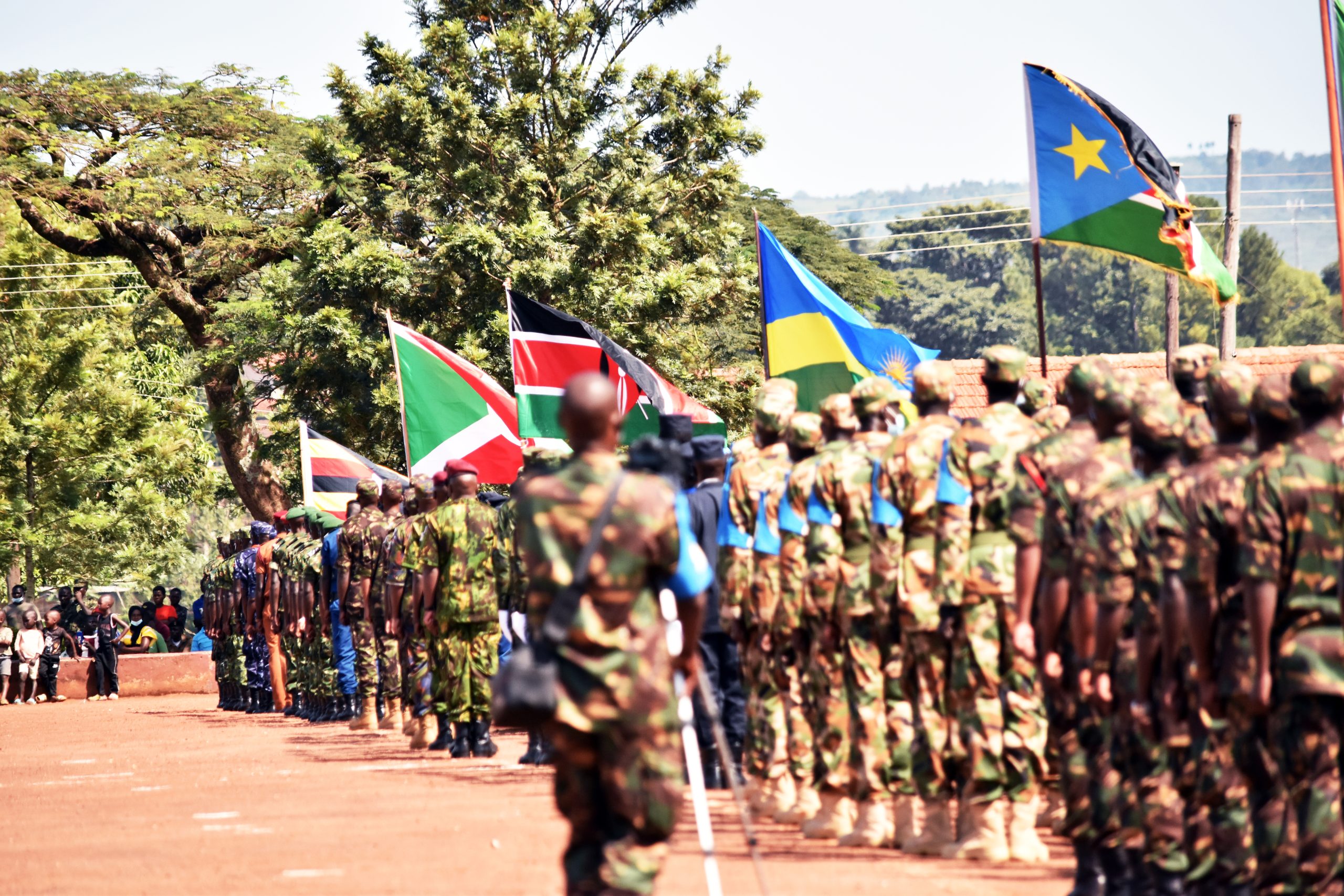 EAC armed forces on parade during the FTX closing ceremony at Gaddafi barracks in Jinja.

The President and Commander-In-Chief of the UPDF H.E Gen Yoweri Kaguta Museveni has today urged East African Community (EAC) Armed Forces to continuously promote the integration agenda as a great pillar for the social economic transformation of the region.

This remark was contained in President Museveni’s speech which was read by the First Deputy Prime Minister and Minister for EAC Affairs Rt Hon Rebecca Alitwala Kadaga as she officiated at the closure of the 12th Edition of the EAC Armed Forces Field Training Exercise (FTX), Ushirikiano Imara 2022 at Gaddafi barracks in Jinja City.

President Museveni indicated that prioritizing integration will help each member of the EAC to benefit from the wider market and strategic security to manage both internal and external threats. “Integration will introduce a bigger market and resources in the region,” noted the President.

He also implored all EAC Partner States to continue working together for the prosperity and security of the people. “Independently each can’t guarantee its survival but together we can,” President Museveni emphasized, adding that the recent entry of the Democratic Republic of Congo into the regional EAC bloc will provide a new trade corridor for the region, basing on the large population in DR Congo.

He concluded by urging all forces to be pro -people, non – sectarian, recruit educated personnel into the forces and keep the spirit of Pan-Africanism.

Rt Hon Kadaga, in her remarks, commended all EAC Partner States for honouring Uganda to host the exercise, noting that the community has directly benefitted from the purchased local food and hardware used to construct contingent camps.

She added that the joint training exercise shows that the Defence Sector has moved faster than other sectors in the integration of East Africa.

The State Minister for Defence Hon Jacob Oboth Oboth applauded EAC Partner States for their unwavering cooperation and support towards the success of the exercise.

He said the rotational basis of the exercise provides an opportunity for states to benefit from each other.

Hon Oboth encouraged participants to use the acquired expertise in solving security challenges. “I believe participants learned a lot and will go back to their countries and duty stations better skilled,” he noted.

Speaking at the same function, the EAC Secretary General Hon. Dr. Peter Mathuki said that the FTX is part of the series to promote peace and security.

He mentioned that the civil military cooperation activities (like the constructed class room blocks and Maternity ward during the exercise renew the Forces commitment to protect and defend the people.

The EAC Secretary General noted that threats in the region continue thus the reason to jointly train and deepen integration. “Let us work together to promote integration and engage in activities that Garner mutual support and confidence,” he said.

The UPDF Joint Chief of Staff Maj Gen Leopold Kyanda on behalf of the Chief of Defence Forces Gen Wilson Mbadi noted that as a region we need to work together to combat crime like cattle rustling.

He further remarked that the joint training exercise is a clear demonstration that Africans got the enthusiasm and capability to solve their own problems. “This assembly is a testimony to the world that integration of EAC is possible for the common good of the East African people,” he emphasized.

Maj Gen Kyanda called for continuous joint training to enhance peace and security and transformation of the region.

He also urged participants to utilize the acquired success and use the observed mistakes to do better in the future.

The Exercise Director Maj Gen Don Nabasa commended Government and UPDF leadership for supporting the exercise that has achieved its intended objective of covering the four thematic areas which include; peace support operations, counter piracy, counter terrorism and disaster management to promote peace and security.

He noted that the CIMIC projects that included construction of a two-classroom block at Nsube Primary School, another two-classroom block at Nyenga Primary School and Maternity ward at Ivunamba HC II in Budondo sub county demonstrates the forces special relationship with the civilian population. “If we work together, we work less but achieve more,” Maj Gen Nabasa told the 1533 FTX participants and invited guests.

This year’s FTX Ushirikiano Imara, translated as strong partnership, ran under the theme: “Promoting Peace, Security and Stability towards the Integration of East Africa.” It started on 27th May and will end on 16th June 2022 in the districts of Jinja, Buikwe and Mayuge.

Participants composed of the military, police, prisons and key civilian components. They were drawn from Burundi, Kenya, Rwanda, South Sudan, Uganda and Tanzania; with Observers from DR Congo to bench mark from it.