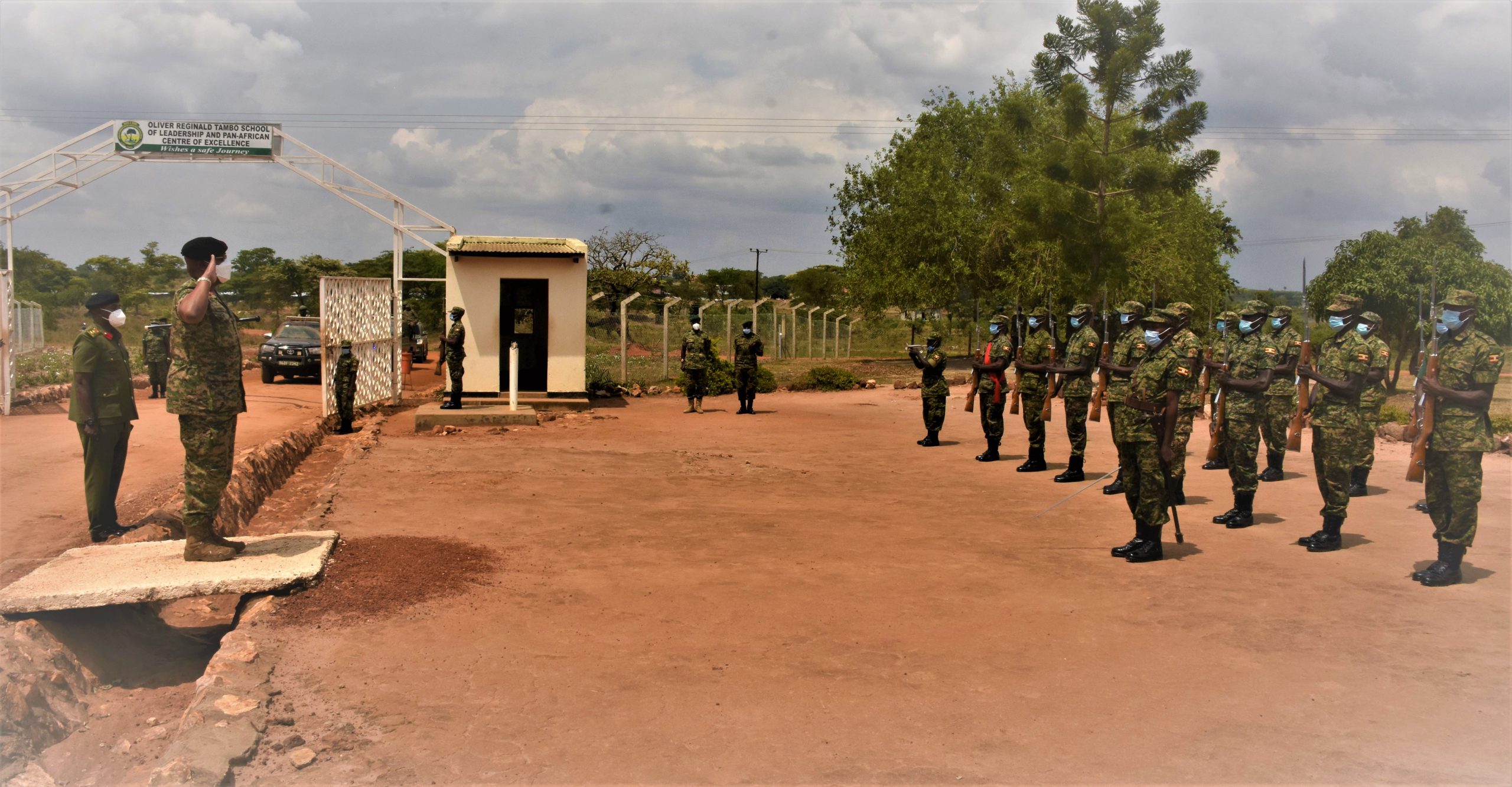 The retreat, that ran from 10th to 13th July 2022, was conducted under the auspices of the UPDF Chieftaincy of Political Commissariat and hosted at the Oliver Reginald Tambo School of Leadership and Pan African Center of Excellence (ORTSL-PAX) in Kaweweta, Nakaseke district Maj Gen Leopold Kyanda Officiating at the closure of a 3-day Retreat of CPCs, PIOs, CIMIC and IOs at Oliver Reginald Tambo in Kaweweta 13 July 2022

In a speech read for him by his representative, the Joint Chief of Staff (JCOS) Maj Gen Leopold Kyanda, the CDF expressed his pleasure to the over 200 senior and junior officer participants, for spending the entire course period with them.

He reminded participants that the UPDF embarked on the task of enhancing ideological re-orientation as early as 2017, which would include retreats to renew performance and strategic guidance to all Officers and Militants of the UPDF. Maj Gen Leopold Kyanda looks on as Maj Charles writes the Roles of a Public Information Officer in UPDF while at Retreat of CPCs, PIOs, CIMIC and IOs at Oliver Reginald Tambo in Kaweweta on 13 July 2022

He reiterated that the UPDF strength is anchored on the pillars of individual and collective discipline. “A pro-people army subscribes to the principles of patriotism and Pan Africanism hence the need for the political education to anchor in all courses,” he cautioned.

He thanked the Chieftaincy of Political Commissariate (CPC) for organizing the retreat that shapes the correct line of the forces.

He then declared the retreat closed and wished them success upon their return to the respective units and formations.

He noted thus, “The objectives of the retreat have largely been realized, most especially in evaluating performance and strengthening the resolve to do better by identifying more cooperation benchmarks.” The CPC further implored the participants to support the sub themes identified by the retreat including promoting and enhancing conscious discipline and promoting the image of UPDF, which were the main themes of the retreat.

In his opening remarks, the School Commandant Col Justus Rukundo, reported that the visiting Officers from the South African National Defence Forces (SNDF), some of whom had taken their training at the school in its infant years, offered to construct a theatre for the school.

He requested the Chief Guest to convey a message to the President and Commander-In-Chief of UPDF H.E Gen Yoweri Museveni on uplifting the ORTSL.

“It’s our prayer that the UPDF leadership considers the urgent need to put up an Agriculture Demonstration Farm on the ground we have prepared so that trainees and other officers do not have to go to Kawumu and Namunkekera farms for practical agricultural lessons but do it here” he entreated.

He finally thanked the UPDF leadership for supporting the Training School.

It was organised under the theme: ” Enhancing Synergies among the Political Commissariat key stakeholders in order to strengthen conscious discipline and public image of the UPDF.”

The retreat was animated with presentations from various departments that promote the welfare of the troops. 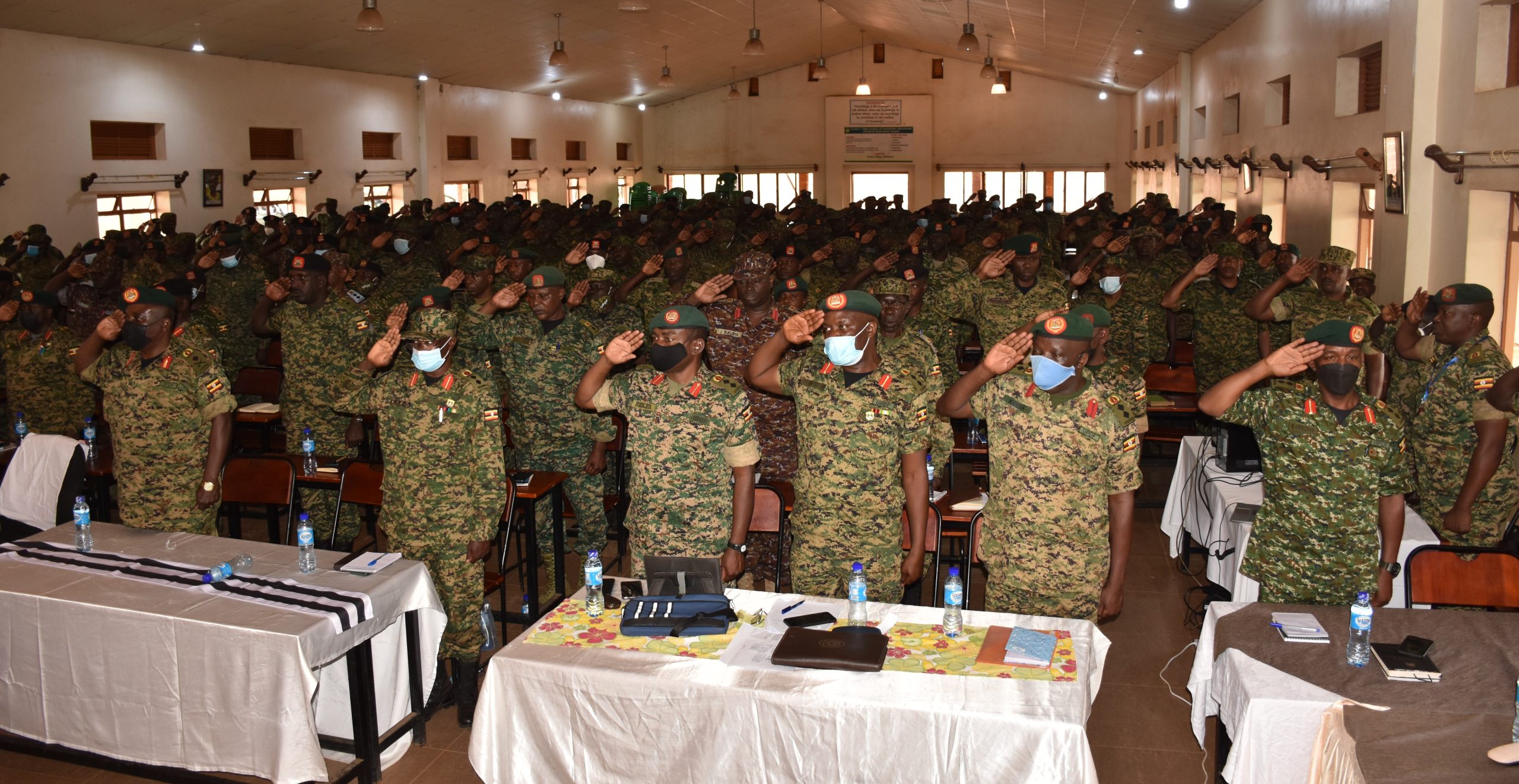 Senior UPDF Officers and Junior Officers singing the National Anthem during the the closure of a 3-day Retreat of CPCs, PIOs, CIMIC and IOs at Oliver Reginald Tambo in Kaweweta 13 July 2022