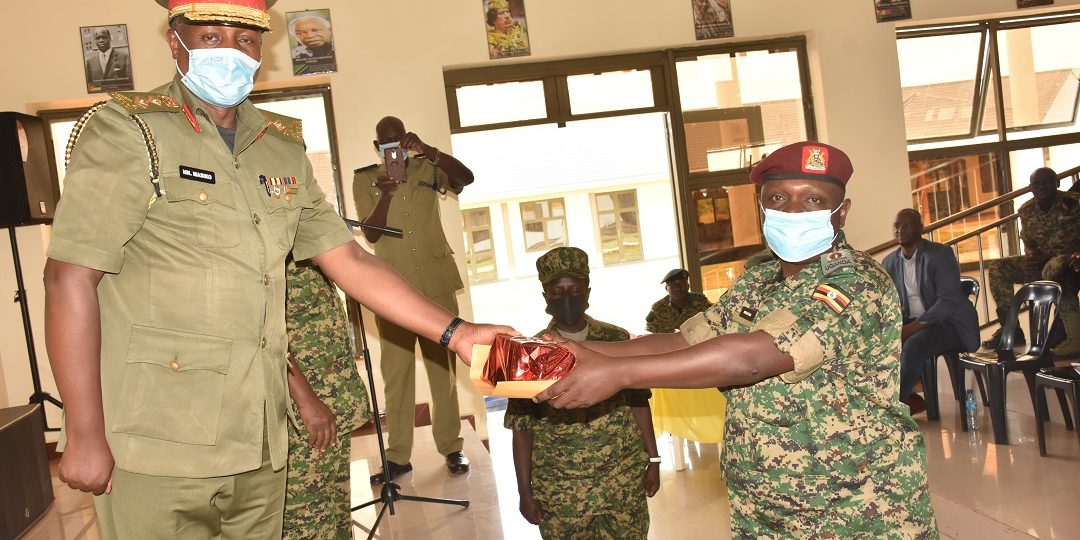 This was Intake 09/2022 and comprised among 97 UPDF, 18 from the Uganda Police Force, 09 from Uganda Prisons Service and 04 Civilians.

Speaking at the function, the CPC said that the tradition of the UPDF is to ensure that its followers are not left behind.

“We ensure that low ranks are given a push,” he said. He added that the course is very deliberate and not only intended to give a transformative ideology but also a career mainstreamed requirement to prepare officers to the next level of service.

He urged the graduands to keep focused on three things; Effectiveness, Efficiency and Integrity, adding that if these three are maintained, UPDF will remain a force admired by all mankind.

He added that leadership is a requirement to address problems and identify their solutions for all soldiers in active service.

“You are ideologically empowered to unlock situations to move things. Officers should take time to learn and internalize, know what to be done and how it should be done. We hope the time you have spent here has helped you internalize happenings,” he noted.

He further remarked that the Chief of Defence Forces Gen Wilson Mbadi congratulated graduates upon their historical achievement, most especially those from the sister security forces and welcomed the cordial cooperation exhibited to guard the existing peace in the country.

Maj Gen Masiko cautioned the graduates to inspire their subordinates and be generators of solutions and not generators of problems. “People should learn from you,” he said, further urging them to embrace Government interventions against poverty, like Operation Wealth Creation (OWC) and the Parish Development Model (PDM), among others.

He concluded by urging officers to support all efforts that uphold Patriotism, Pan-Africanism, Democracy, Socio – economic Transformation, noting that embracing these would scale up Regional Integration.

The objectives of the course were to impart ideological clarity, explain the gains of the peoples’ revolution, enhance leadership abilities among officers and educate them about the Geo-strategic environment and its related challenges.

The Commandant NALI, Brig Gen Charles Kisembo, advised the Graduands to look at this ending experience as a beginning of a new one; where they will be called upon to offer service to the nation.

“Inculcate the lessons you learnt into life habits, use logic and do not be subjective or illogical, ” he advised.

Col Anatoli Nuwagira, the Director of Political Education – Land Forces noted the need to widen ideological coverage to include other sister security forces, like the Uganda Wildlife Authority.