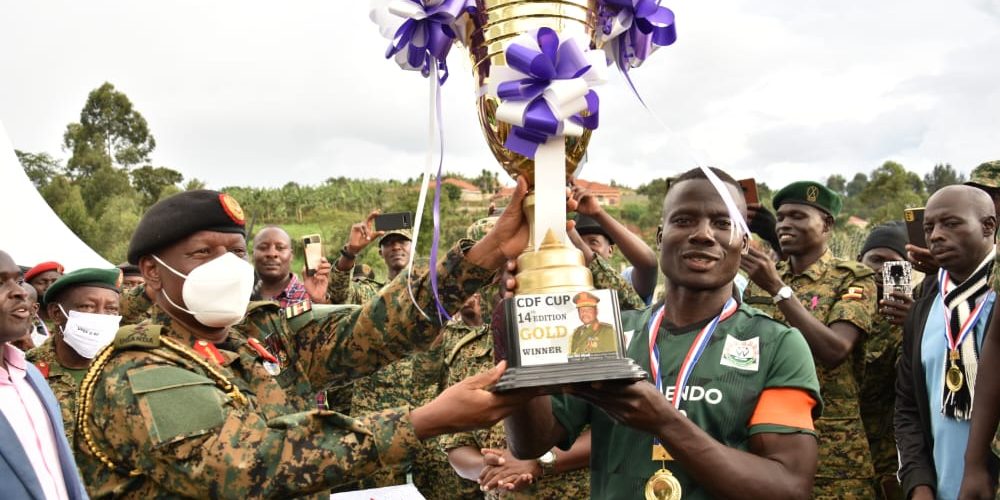 Buhinga Stadium Fort Portal City: The 14th Edition of the annual UPDF CDF football and net ball Cup that has been ongoing for the last two weeks has ended with Motorized Infantry (MOI) Brigade winning the football trophy and 1st Division taking the netball one.

The tournament attracted 19 football and 6 netball teams and was played under the theme, “Enhancing Physical Fitness and Wellness through Sports in fulfillment of Strategic Objective of the Defence Forces.”

Presiding over the closing ceremony, the Chief of Defence Forces (CDF) Gen Wilson Mbasu Mbadi informed the participants, officials and invited guests that this year’s theme was well thought out in addressing the UPDF strategic objective of keeping the forces physically and mentally fit.

Referring to Pierre de Coubertin; the Visionary founder of modern Olympics games in 1896, who expressed “a healthy body and healthy mind and the importance of physical training in building strong nations and an individual” the CDF said militaries world over have formed sports activities and that UPDF could not be left out. “We therefore coined UPDF CDF Soccer Cup”. He said.

Gen Mbadi stressed the efforts in sports activities as making sure military games become part of military activities to prepare soldiers in as far as alertness, physical fitness and mental fitness are concerned. He added that this in away will enable UPDF deliver effectively on its constitutional mandate.

“Therefore the importance of enhancing physical fitness and wellness in UPDF is self evident because they are essential in maintenance of good health, mental alertness, stamina, unitary discipline and high impetus for coordination and collaboration,” the CDF observed.

As Chief Guest, he summed up military sports activities benefits which translate into three major strategic outputs; provision of much needed output for rigors, team work for the units to function in cohesion and bridging the gap between the forces and the masses. “Sports bring us closer to the communities at an individual level and institutional level. Without the population we are as dead as fish out of sea. “You can see how your three weeks’ stay at St Leo’s College Kyegobe has benefited the children of UPDF,” Gen Mbadi said in reference to the half bursary offered to children of UPDF by the Head teacher of St Leo’s College Kyegobe.

The Chief Executive Officer Wazalendo SACCO (WSACCO), Col Joseph Freddy Onata who represented the chairman Board of Directors Maj Gen Sam Kavuma appreciated the UPDF leadership for organizing sports especially the football tournament. “As Wazalendo SACCO we are happy to support the UPDF teams. It is one way of identifying with our members and also a means of show casing what we can do for our members in terms of products and services thereby enabling them to save and invest for development.” Col Onata observed.

Col Onata reported that WSACCO supported the 14th Edition CDF Cup tournament with all the sports gear for the 19 football teams which participated in the tournament.

He said that through the corporate social responsibility function, WSACCO been able to give support to the communities beyond the SACCO membership.

Col Onata encouraged the teams to ensure that they save more, embrace WSACOO affordable products to support its growth and improve their individual social economical conditions.

Mt Atuhirwe Trophy, the Head teacher of St Leo’s College Kyegobe which hosted the participants, appreciated the high level of discipline, responsibility, maturity and politeness exhibited by the UPDF teams who resided at the college’s premises. “For the 3 weeks we have hosted UPDF teams at St Leo’s College Kyegobe, we have no single complaint and am very confident there will be no complaint when we leave here. If there is any, I will vehemently deny it because that cannot happen in a day when we have been with them for the last three weeks.” noted Mr Atuhirwe.

He added that for that reason, he has offered to give half bursary to children of UPDF to the school. “I have talked to my bosses the Chairman Board of Directors and Fortportal Diocese Education Department and they have accepted in corporate social responsibility spirit we return in partnership with UPDF that for the next four years St Leo’s college will offer half bursary to all children of UPDF soldiers and this starts with midnight,” he pledged.