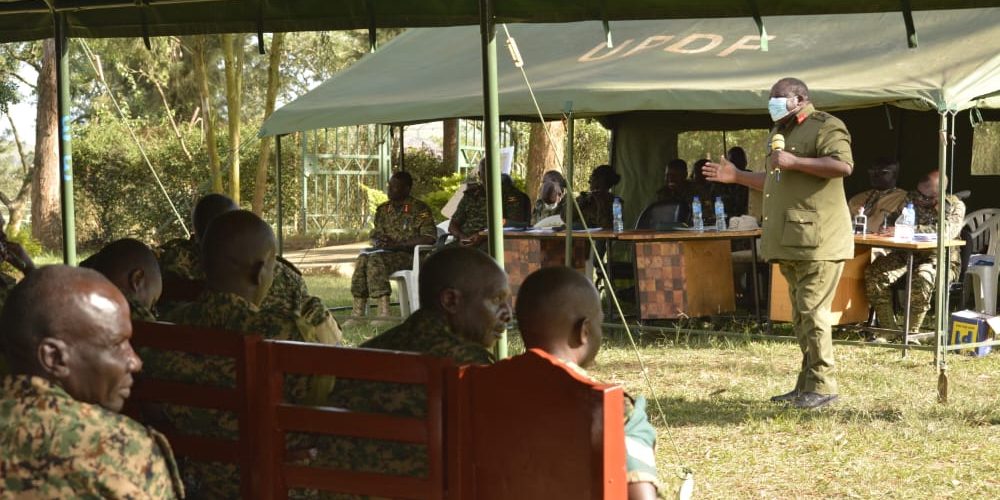 116 Officers and Militants due for retirement and discharge under the UPDF 2nd Division turned up today at the Division Headquarters at Makenke, Mbarara City for documentation and sensitisation.

Division 2 Commandder Maj Gen Francis Takirwa delivered a word of wisdom to the impending retirees informed them that life after the army is good as long as one is prepared. He guided them to seek permission from their immediate superiors to go home and prepare till called upon for retirement preparations before 31 July 2022.

He urged the retirees to become good Ambassadors of the mighty UPDF and when the time for their retirement and discharge comes and return to their communities.

He also appealed to them to avoid diversionary and subversive groups who wish to destabilise the peace and security, which have been hard earned by sweat and blood, of so many people, including these same impending retirees. “There is time for everything, you came and served and now its time to retire. Prepare to be good citizens of the country you served with all your might,” he counselled them.

Col Deborah Nayebare, the UPDF Deputy Chief of Pensions and Gratuity while addressing the group proudly informed them of the benefits of COPG to retirees, “I do affirm that since the establishment of the Chieftancy of Pensions and Gratuity (COPG) in 2015, we as COPG have been able to pay more than 9,000 retirees of batch 1 to 11 and all their terminal benefits are paid,” she affirmed.

While explaing to them intial ground work of effective retirement moods, she mentioned many which included Normal retirement empahsising age as a critical factor bringing to light the different ages of retirement according to different ranks, voluntary retirement and death retirement amongst others.

She informed the impending retirees that whatever COPG does as a Chieftancy is derived from the 1995 Constituiton of the Republic of Uganda Article 254, the Pensions Act, Cap 286 and UPDF Act 2005.

17 Set To Retire From UPDF Armoured Brigade Headquarters
May 5, 2022