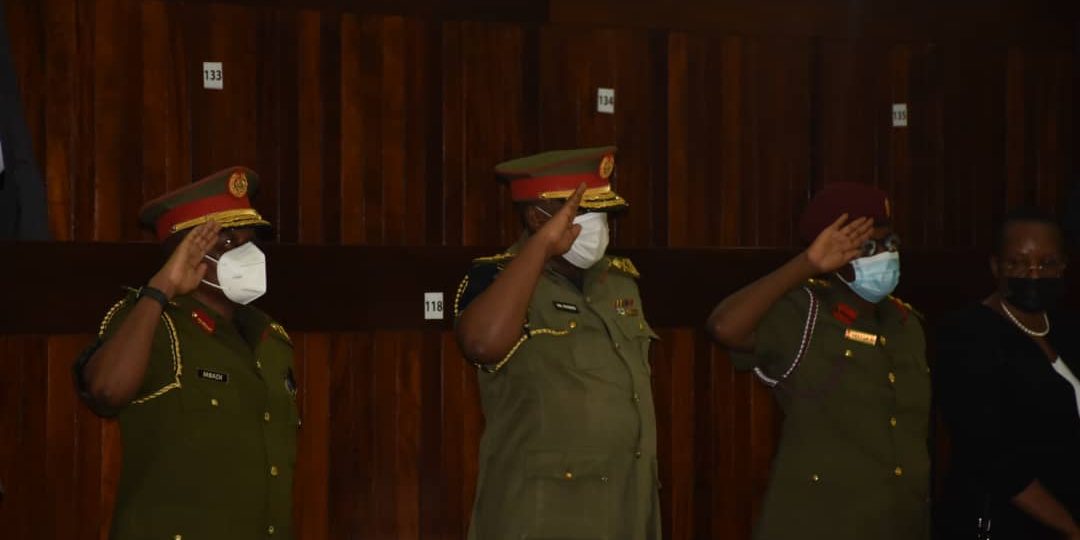 MoDVA/UPDF joined the rest of parliamentarians in a special sitting today to mourn and pay tribute to the fallen speaker of the 11th Parliament. 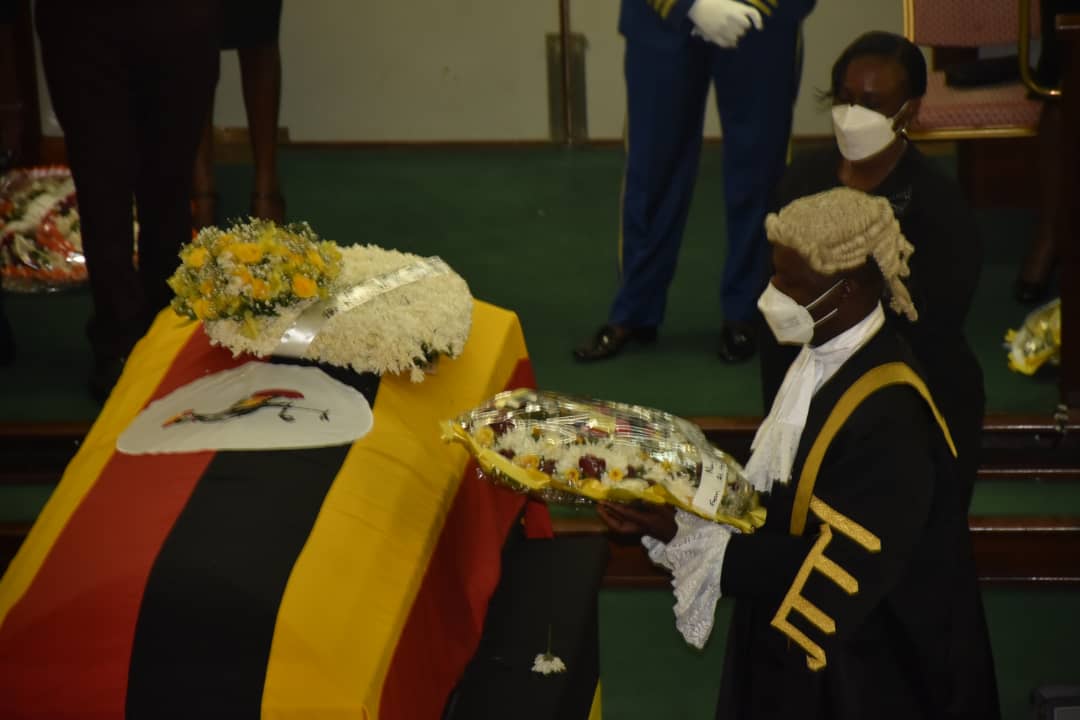 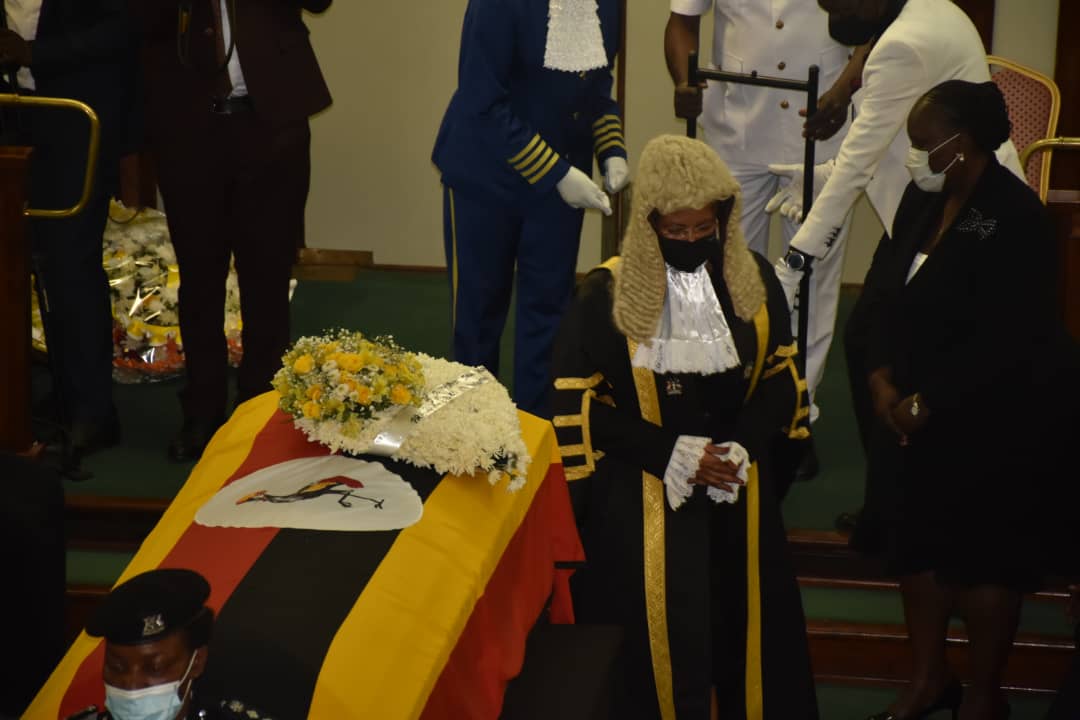 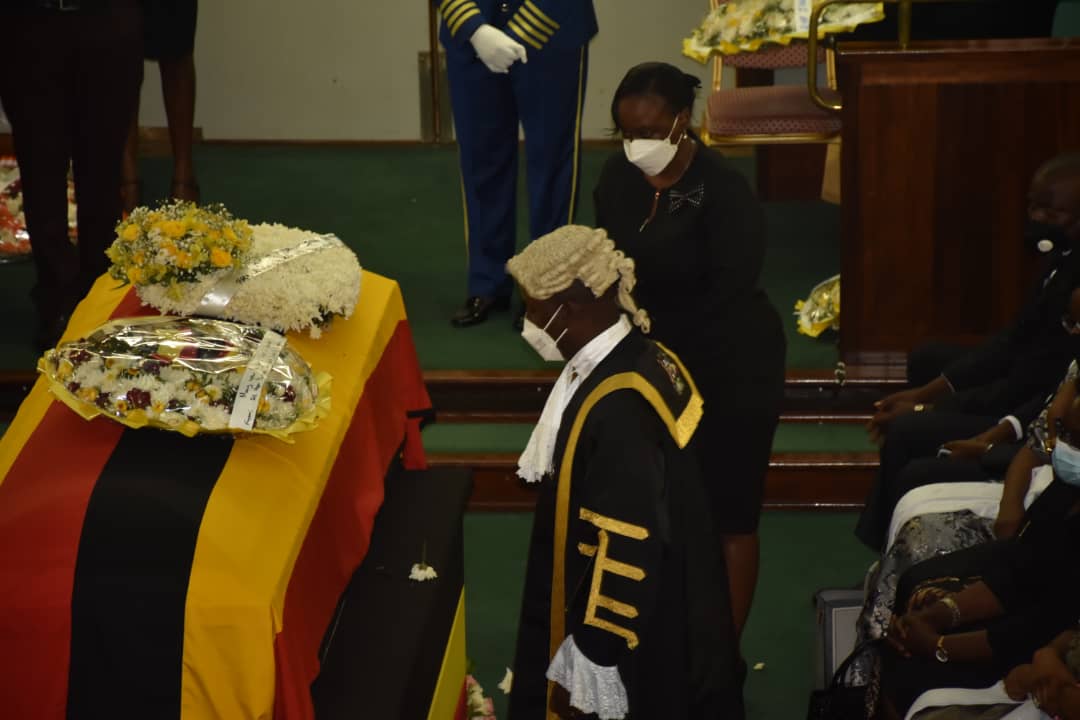 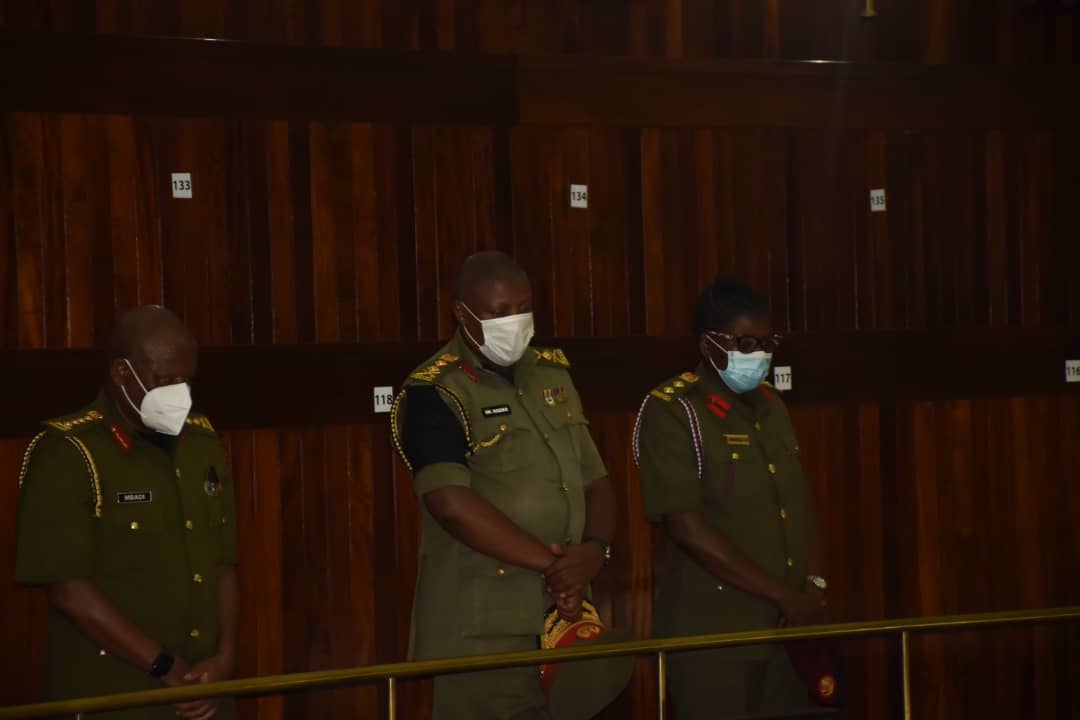 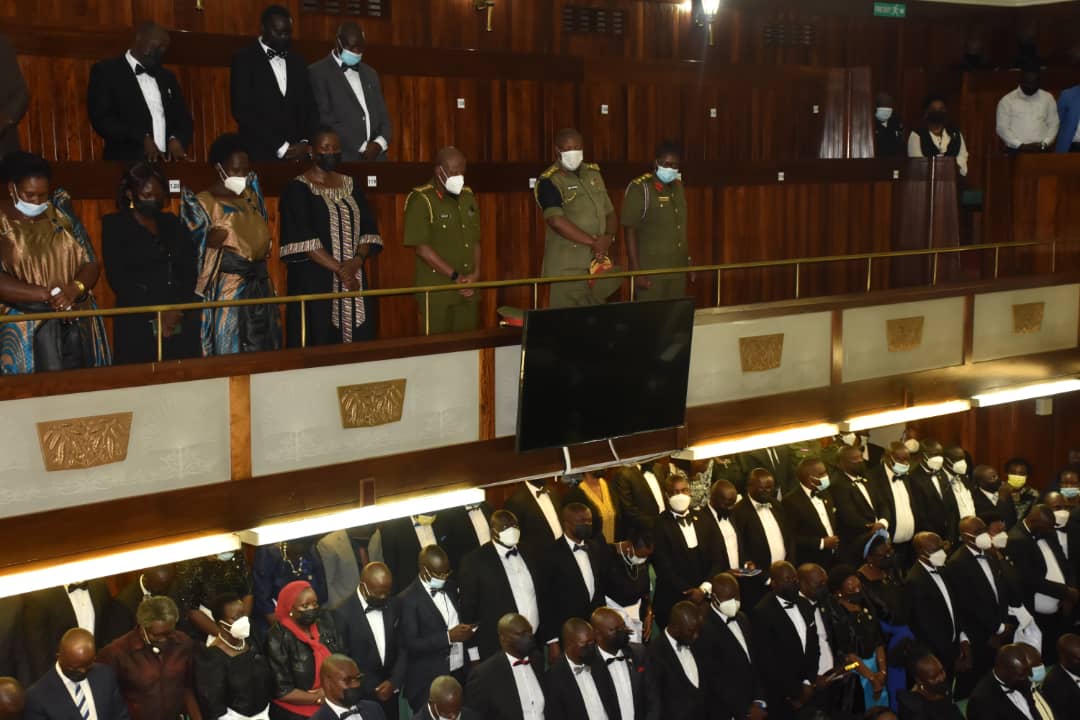 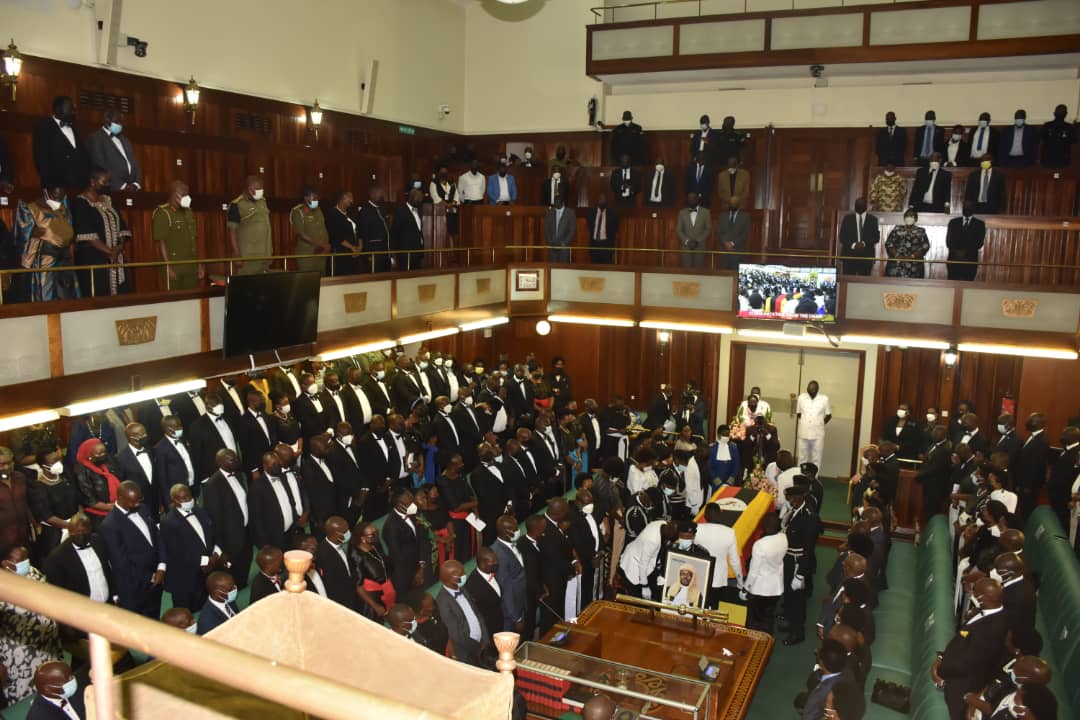 The casket was brought to Parliament today morning for viewing by Members of Parliament and the public after which a special sitting was held in his honor in which members eulogized the fallen speaker.

The Speaker of Parliament, Anita Among led the Members of Parliament to pay their final respects as they acknowledged the significant contributions the Late Rt. Hon. Oulanyah made to the country.

While moving the motion for the special sitting, Her Excellency Jessica Alupo said “Jacob Oulanyah was a dedicated Speaker who served his country and the Parliament of Uganda  with  enthusiasm  and  political tolerance. Recognising his contribution to Acholi Sub-region through his participation in the peace talks between the Government of Uganda and the Lord’s Resistance Army and championing government programs for the social economic transformation of the people of Acholi sub-region and Uganda at large.”

Speaker Anita Among described Jacob Oulanyah as a great leader, mentor and an advocate of peace. She thanked H.E the President of Uganda Yoweri Kaguta Museveni for doing everything possible to save the life of the Late Hon Oulanyah.

Rt Hon Jacob L’Okori Oulanyah, born 1965, served as the speaker of the 11th Parliament of Uganda from 2021 until his demise last month. He was elected to that position on 24th May 2021. He served as Deputy Speaker of the Ugandan Parliament, from May 2011 until May 2021.Oulanya was also a Member of Parliament representing Omoro County and the NRM Vice-Chairperson-Northern Uganda.

Members present described him as a Speaker who has left behind a legacy of servanthood leadership who did not just talk but lived his talk, who served parliament, Omoro County, Northern Uganda and the whole of Uganda at large with a spirit of devotion, commitment, humanity (Ubuntu), prioritized government business, stood for politics of the answer not the anger, an encyclopedia of the parliamentary rules of procedure and practice, hugely advocated for women  empowerment, who put the interests of the country above self and political affiliations and a person who never mixed political perceptions with his relationships; a legacy that should be emulated.

The Minister of Defence and Veteran Affairs, Hon Vincent Ssempijja eulogized and described the late as someone who had lifted the Ugandan flag high both at National and International level. “Leaders always have divided loyalty due to many tasks and responsibilities, however, Oulanyah was always loyal to his Speakership roles and to his constituency. He always wanted his people to come out of poverty. When I was the Minister of Agriculture, he came to me and ensured we took coffee to Acholi. Currently, various farmers in Omoro-Acholi, have coffee plantations thanks to Oulanyah.”

In an interview with the Chief of Defence Forces (CDF), Gen Wilson Mbadi, on behalf of Uganda Peoples’ Defence Forces (UPDF) condoled with the family, friends and relatives of the late Jacob Oulanyah upon the demise of Oulanyah who was still in his primetime.

“The UPDF fraternity stands in solidarity with the bereaved family, friends and relatives of Oulanyah and prays that God comforts them. Oulanyah has not passed-away like a shifting shadow; he has left a legacy. I pray that his loved ones find comfort in the words of Mathew: 5: 4, “Blessed are those who mourn, for they will be comforted (NIV).” CDF said.

The body will lie in State at Parliament from today until tomorrow and thereafter, there will be a State funeral at Kololo Ceremonial Grounds on Wednesday Friday, 6th April 2022, where President Museveni is expected to be the Chief mourner.

Since Oulanyah’s death, the East Africa, Uganda and any other flag in the country have flown at half-mast and will continue to do so until his burial on 8th April, 2022 at his ancestral home; Lalogi village in Omoro District and the day will also be observed as a public holiday.

UPDF Troops Urged To Prepare For Their Destiny As Maj Joseph Mukiraine Is Laid To Rest
May 30, 2022