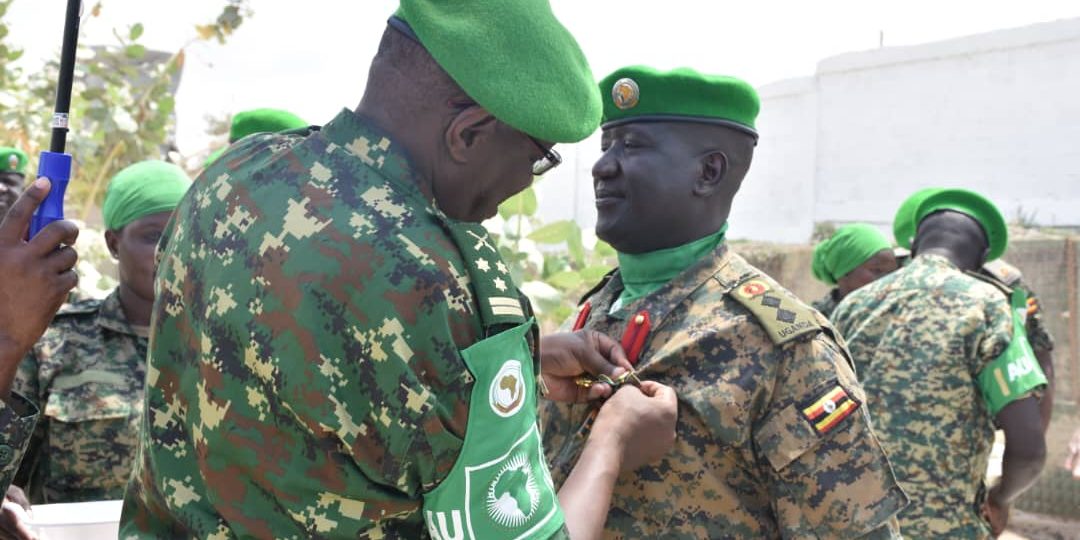 The Africa Transition Mission in Somalia/(ATMIS) Force Commander Lt Gen Diomede Ndegeya has this afternoon applauded the Ugandan Contingent in Somalia for the job well done since their deployment in the mission area. Gen Ndegeya thanked the UPDF not only for its professional conduct, but also for being the lead force in advancing the African ATMIS mandate in Somalia.

Gen Ndegeya who is the overall military head of the five troop contributing countries (TCCs) in Somalia, including Uganda, Kenya, Ethiopia, Djibouti and Burundi made the remarks at the function to award medals and certificates to the Ugandan Battle group XXXII that has just completed its tour of duty after one year in the mission area.

Gen Ndegeya who was the Chief Guest at the function moved tens of senior UPDF officers who attended the ceremony when he frankly said “I thank the Government of Uganda that allowed you to come here and have a contribution to the stabilization of our sisterly nation Somalia. Your Soldiers are not only committed, they are doing their role as mandated and wea are very proud of you,” he remarked. “I’m not trying to use diplomatic language, I’m saying this sincerely from the bottom of my heart,” he emphasized.

Gen Ndegeya also took the opportunity to guide the incoming Battle Group XXXV Commander to adapt to the new ATMIS arrangement as opposed to AMISOM that has operated since 2007.

The UPDF forces are currently in charge of Benadir region, which comprises the Capital Mogadishu. They are also in charge of the security of the base camp that has several international partners’ offices and residences.

The symbolic function saw 24 officers and militants decorated with the African Union medals for the job well done. For operational, engagement, the rest of the troops medals in the battle groups will be delivered in their respective areas of deployment.

In his remarks, the Ugandan Contingent commander Brig Gen Keith Katungi thanked BG XXXII for securing the important town of Barawe that has a seaport and airport that serve a vast area of lower shabelle region and beyond. “You have done a great job, including securing the elections of the members of Parliament of lower Shabelle that were held in Barawe,” he commended them.

During his remarks, Brig Gen Katungi thanked the UPDF forces in Somalia for providing security that led to the successful swearing in of the members of Parliament elected from the different regions of the country. “You have remained with two immediate tasks, securing the elections of the speaker, and the presidential elections,” He reminded the Commanders.

Presidential elections are expected to conclude before the end of April after the election of the speakers for both upper and lower house. The Ugandan forces working under ATMIS are mandated to secure both activities.