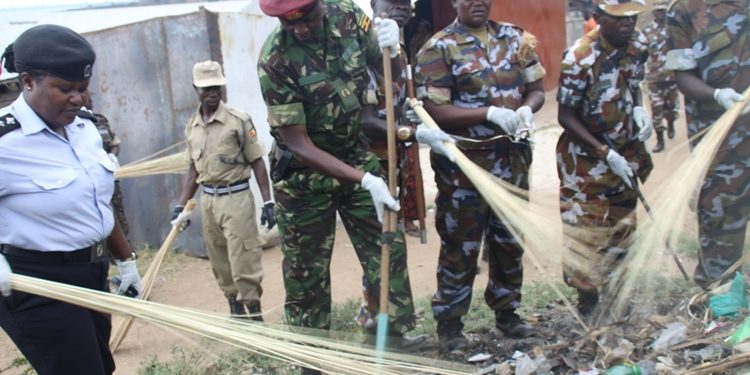 The UPDF soldiers carried out more corporate social responsibility activities in Entebbe town and its outskirts ahead of Terehe Sita Day celebrations on Thursday.

This was part of a string of corporate social responsibility activities the army has undertaken across the country during the Army week that precedes the Tereha Sita Day celebrations.

The Tereha Sita Day is marked annually in commemoration of the first attack by the National Resistance Army on Kabamba barracks on February 6, 1981.The attack heralded the start of a five year guerilla war that ushered President Yoweri Museveni into power in 1986.

The hospital’s medical superintendent, Dr. Moses Muwanga, who received the drugs, expressed gratitude towards the UPDF for the friendly gesture.

“We are very grateful. Pass our sincere thanks to the government for the support and cooperation we have always enjoyed from the army,” he said.

One of the patients, Joseph Ssempala, could not conceal his happiness at the UPDF’s donation to the hospital saying “What we need as the ordinary people is to get the drugs when we come to the hospital. I have already got my drugs,” he added.

The army was joined during the cleaning exercises by a group of students who identified themselves as Kampala International University-NRM patriots.

“We are here to celebrate the strength and legacy our army has established,” Wilson Mugoya, the KIU-NRM patriots’ leader said. This year’s Tarehe Sita Day celebrations will be held in Buhweju district on the theme “National consciousness and Pan-Africanism is the cornerstone for African peace, stability and transformation”

Commenting on the cleaning exercise and the cooperation that exists between the army and the people, a resident in Entebbe town said “This is a pro people army indeed. I wish the police could borrow a leaf from the conduct of the UPDF,”

Col. Sabiiti advised the residents to bring their queries about the police force to the attention of the Inspector General of Police, Gen Kale Kayihura saying “We are all doing the same and we would like your perception about the police to improve,”

Maj. Magezi said that the UPDF owes its success with in and abroad to the support from the civilian population, strong civil military relations, correct ideological orientation and superior organization and discipline.

“It’s our tradition to always appreciate the people of Uganda for their support. The support we get from the people has done us proud internally and outside,” he added.