Uganda and Kenya have signed an agreement on cooperation in defence and security today at Speke Resort Munyonyo in Kampala. 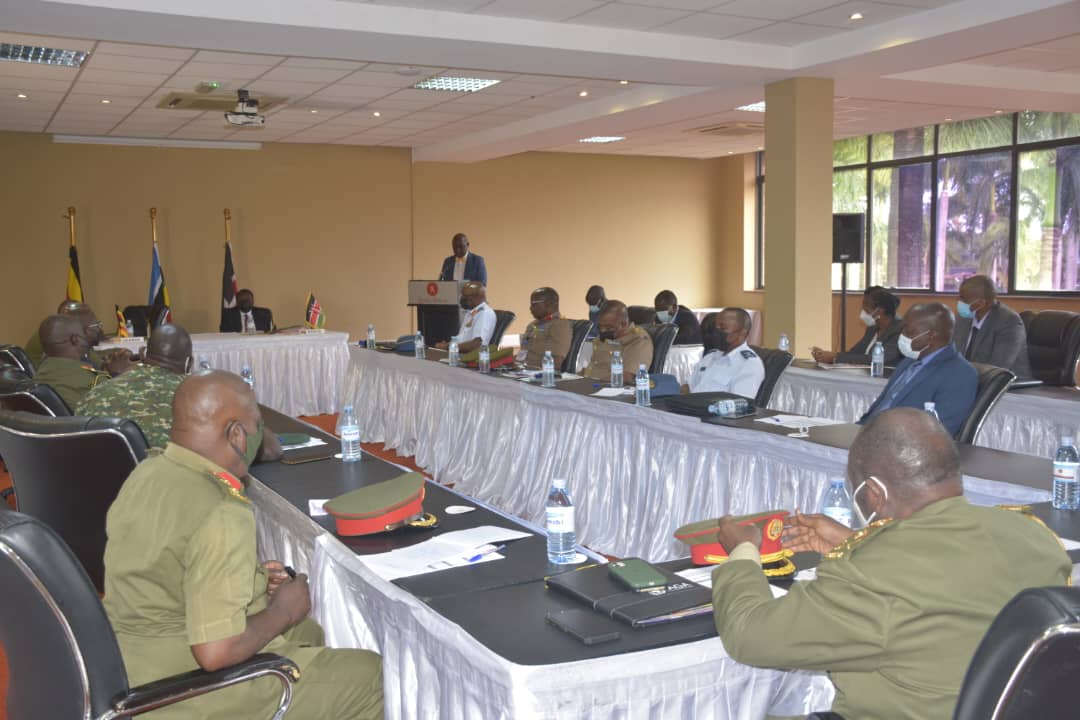 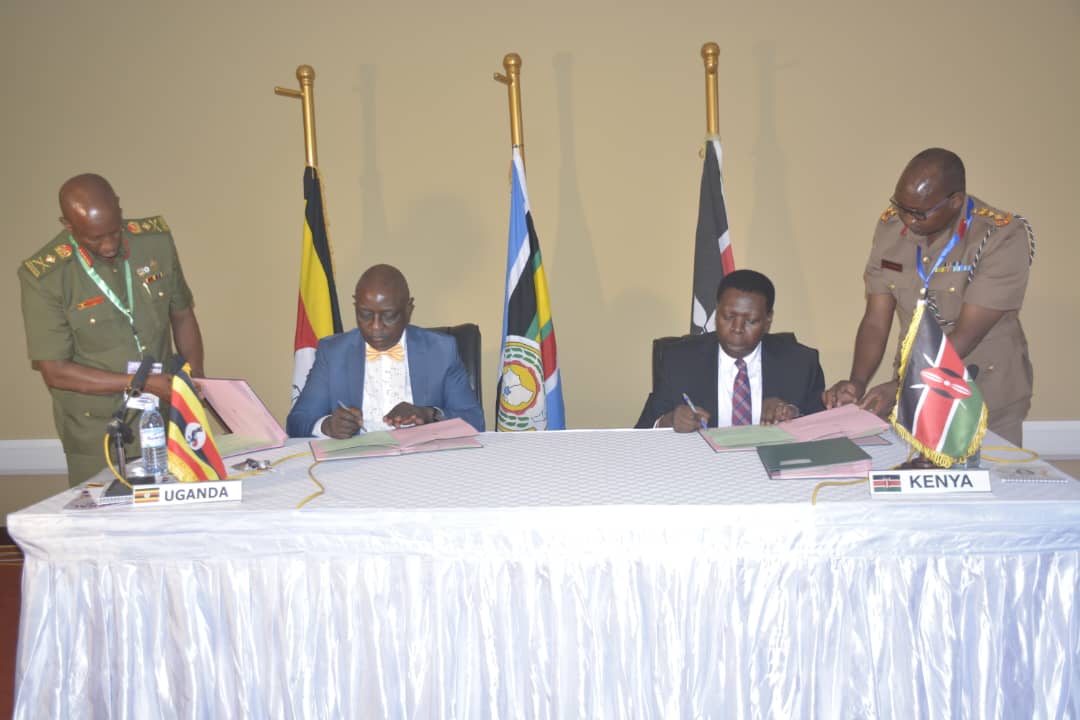 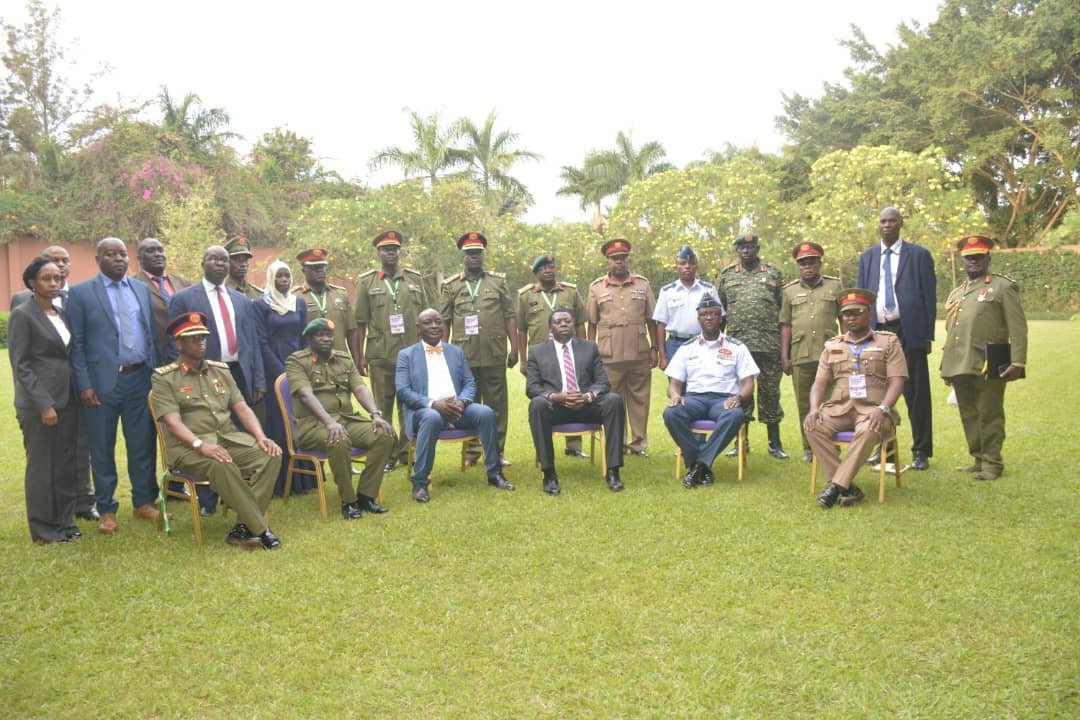 This exchange of the signed agreement is the culmination of the two-day (5th – 6th April, 2022) meeting at Speke Resort Hotel Munyonyo, that aimed at making respective amendments on the earlier draft agreement (February 2022 in Nairobi) by both parties before its adoption upon approval by Chiefs of Defence Forces (CDFs) and Ministers of Defence from both countries.

Hon Vincent Bamulangaki Ssempijja commended the Government of Kenya, most especially the Technical Experts Working Group (TEWGs) for coming up with an excellent agreement that would be adopted by both countries for the sustainability of peace and security.

He said the agreement will address threats and facilitate joint responses in managing threats. “This strategic engagement is a culmination of the strategic vision of their Excellences the Presidents of Uganda and Kenya who implored us to fast track this framework in areas of general interest for the security of both Uganda and Kenya,” said Hon Ssempijja.

He recounted that both Uganda and Kenya have come a long way from the ravages of the colonial time that ruined social economic transformation and negatively impacted regional security.

He reiterated that fighting crime is no longer a singular responsibility of one state, because insurgent groups like Al-Shaabab, Al Qaeda, ADF etc pose a real threat that could destroy our countries, if we don’t urgently address the security issues facing our countries.

Hon Ssempijja particularly noted that trafficking in arms and the proliferation of small arms is distabilising the Karamoja and Turkana sub regions.

He, therefore, urged stakeholders involved in the proliferation of small arms to stop the criminality and engage in more viable social economic activities to foster prosperity.

He thanked the TEWGs and CDFs from both UPDF and KDF for a job well done.
Uganda’s Defence Minister thanked Hon Wamalwa for the cooperation that has seen the historic revival of the bilateral agreement for engagement and collaboration in defence and security. “We need to make sure that we are ready to face the challenges and together, we shall win,” Hon Ssempijja told the TEWGs from both Kenya and Uganda.

In his remarks, the Cabinet Secretary for Defence in the Kenya Government Hon Eugene Wamalwa condoled with Uganda for the loss of the former Speaker of Parliament Rt. Hon Jacob Oulanya.

He expressed his gratitude to the Technical Experts Working Group for the time and effort put into the preparation of the agreement. “I am happy that the three things we had discussed with my brother Hon Ssempijja in Nairobi recently have come to fruition. These included signing the bilateral agreement as a framework for security cooperation between the countries, easing the long quee of trucks at the border point and organising a meeting of Defence Ministers in the region, which sat in Arusha recently,” remarked Hon Wamalwa.

He noted that with the joining of the DR Congo into the East African Community bloc, the region had expanded from the Indian Ocean to the Atlantic ocean; but quickly added that this expansion comes with its problems especially terrorism.

He further promised continued support in the fight against Al-Shaabab in Somalia since the threat of terrorism continues to grow in the region.
He emphasized that signing the agreement strengthens the framework for cooperation.

The UPDF Deputy Chief of Defence Forces Lt Gen Peter Elwelu thanked the leaders of both countries for their continued effort to make the region more peaceful and stable. “Peace and security is not good for only the two countries but also important for the entire region especially for socio-economic transformation,” he noted.

He concluded that the agreement shall provide a foundation for cooperation in matters that would undermine peace and stability.

Lt Gen Elwelu promised military support in all matters that ensure that the agreement is fully implemented.

The Vice Chief of the Kenya Defence Forces Lt Gen Omondi Ogolla re-echoed that the agreement is a culmination of work started early this year following the guidance of the leaders from both countries. “The renewal of this collaboration will bring the forces to work together more strongly to foster peace and security in the region,” he said.

He recommended signing the agreement for the actual restoration of peace , especially across borders.

Lt Gen Ogolla thanked the technical team for preparing a good document and the hosts Uganda for the enjoyable hospitality.

The meeting was attended by the Uganda Peoples’ Defence Air Forces Under Secretary Mr. James Mutabazi, the 2 Division Commander of the UPDF 3 Divison Brig Gen Elias Okolong, Deputy Chief of Legal Services Col Moses Wandera and the Chief of Policy and Planning Col David Tweheyo, among other MODVA/UPDF experts.