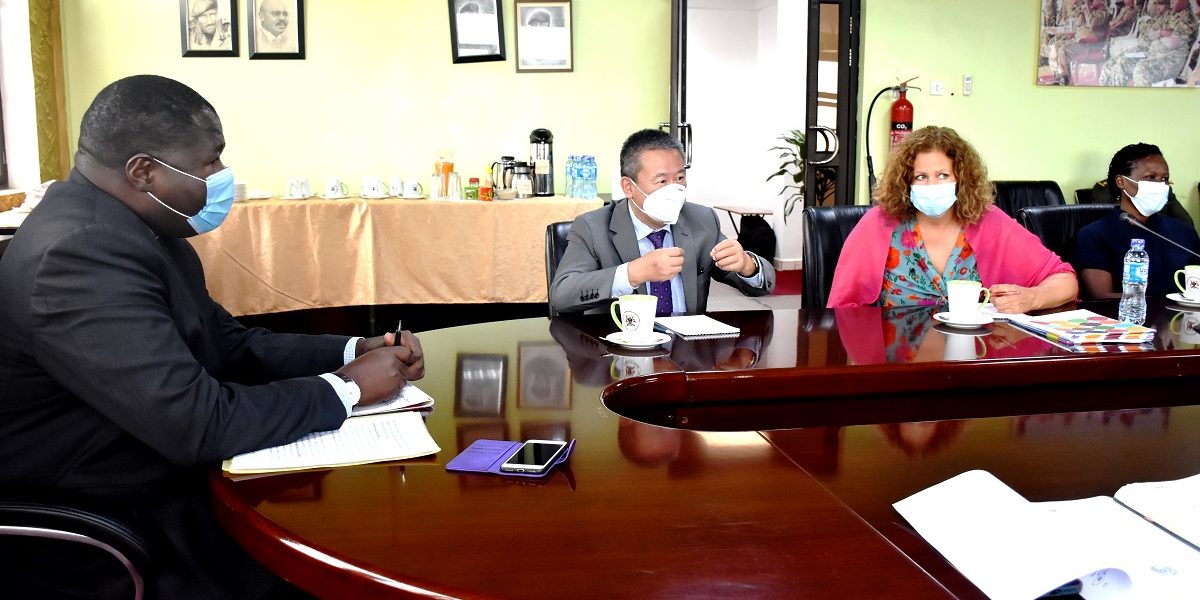 The State Minister of Defence in Charge of General Duties, Hon.Jacob Oboth-Oboth has today met  the Special Envoy of the UN Secretary General for the Great Lakes region, H.E. Huang Xia at the Ministry of Defence and Veteran Affairs Headquarters, Mbuya.
During the meeting, Hon. Oboth and H.E. Huang Xia discussed issues of regional peace and security in the Great Lakes region in preparation for H.E. Huang’s periodic briefing to the United Nations Security Council on the Great Lakes Region.
Hon Oboth said that Uganda is generally stable and peaceful although the country continues to experience threats of terrorism perpetuated by regional terror groups such as the Allied Democratic Forces (ADF), Al-Shabaab and Islamic State- Central Africa Province (IS-CAP). He also observed that the country has been experiencing isolated cases of cattle raids especially in the Karamoja sub-region, impacting on communities whose livelihoods are largely dependent on livestock.
“We believe this problem is largely aggravated by trans-national criminal rackets that are aiding proliferation of small arms across territorial borders. “Nevertheless, the UPDF is doing its best in addressing the situation and normalcy will be restored.” Hon Oboth said. 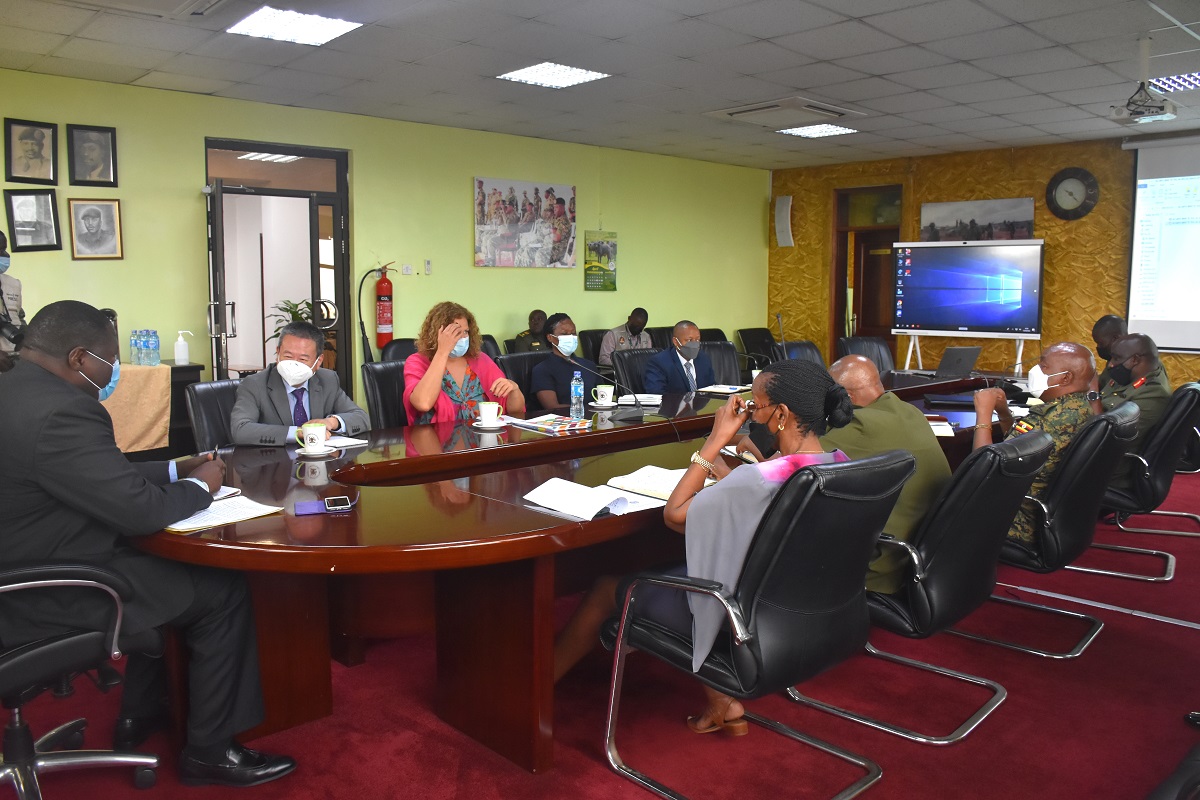 Defence and UPDF Leadership with a Delegation of the Special Envoy.

The Minister observed that the intermittent political instabilities resulting from unresolved political disagreements and contestations for power by armed groups remains a serious challenge to regional peace and stability. “Indeed this trend has accelerated humanitarian situations in the region causing wide spread displacement of communities particularly women and children.
“Currently Uganda, hosts over 1.5M refugees and asylum seekers from across the region,” he said, adding” We believed  that in the long term, the only way we can jointly resolve this problem is by addressing the underlying causes of state fragility in the affected countries and this is by undertaking more proactive measures geared towards rebuilding political and security institutions such as the armed forces,”
On his part, H.E. Huang Xia reassured the Minister of the full confidence the United Nations has in the capacities of Uganda’s security institutions to ensure peace and stability in the country and across the region. He concurred with the Minister on the rising threats posed by terrorism groups in the region of which Uganda has been a victim of several terrorist attacks.
“The UN is very attentive and monitoring very closely these developments in regard to terrorism and in this regard, during the UN Security Council session on the Great Lakes region on 27 Apirl 2022, the Council will be also considering  the briefing focusing on the threats emanating from terrorism,” said H.E Huang. 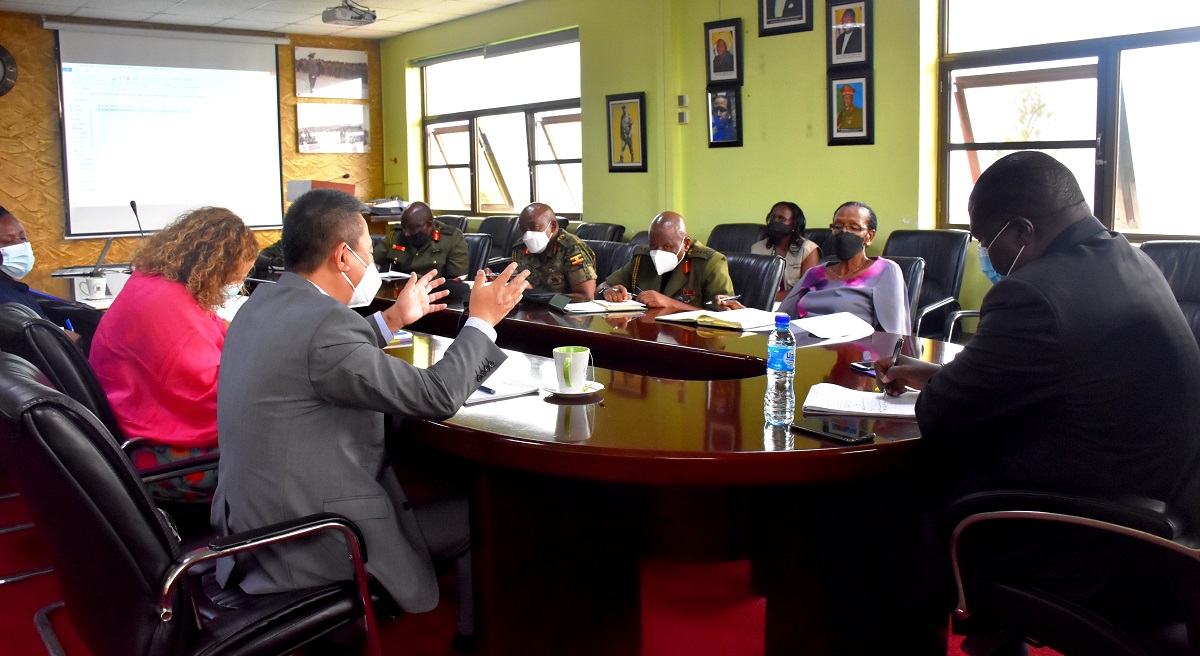 H.E Huang Xia Making a point during the Meeting.

HE. Huang also said his office will continue to work very closely with all the concerned countries in support of peace and security especially in the region including ongoing coordinated efforts among concerned countries in the region.
“In order to achieve a compressive and final solution, there is need for regional collaboration because insecurity in one country in insecurity in all.  I call upon all regional countries to work together,” he emphasized.
In attendance at the meeting were the Permanent Secretary of the Ministry of Defence and Veteran Affairs; Ms Rosette Byengoma, the Chief of Defence Forces Gen Wilson Mbadi, Joint Chief of Staff Maj Gen Leopold Kyanda, Chief of Military Intelligence, Maj Gen James Birungi and the UN Resident Coordinator, Susan Ngongi Namondo. 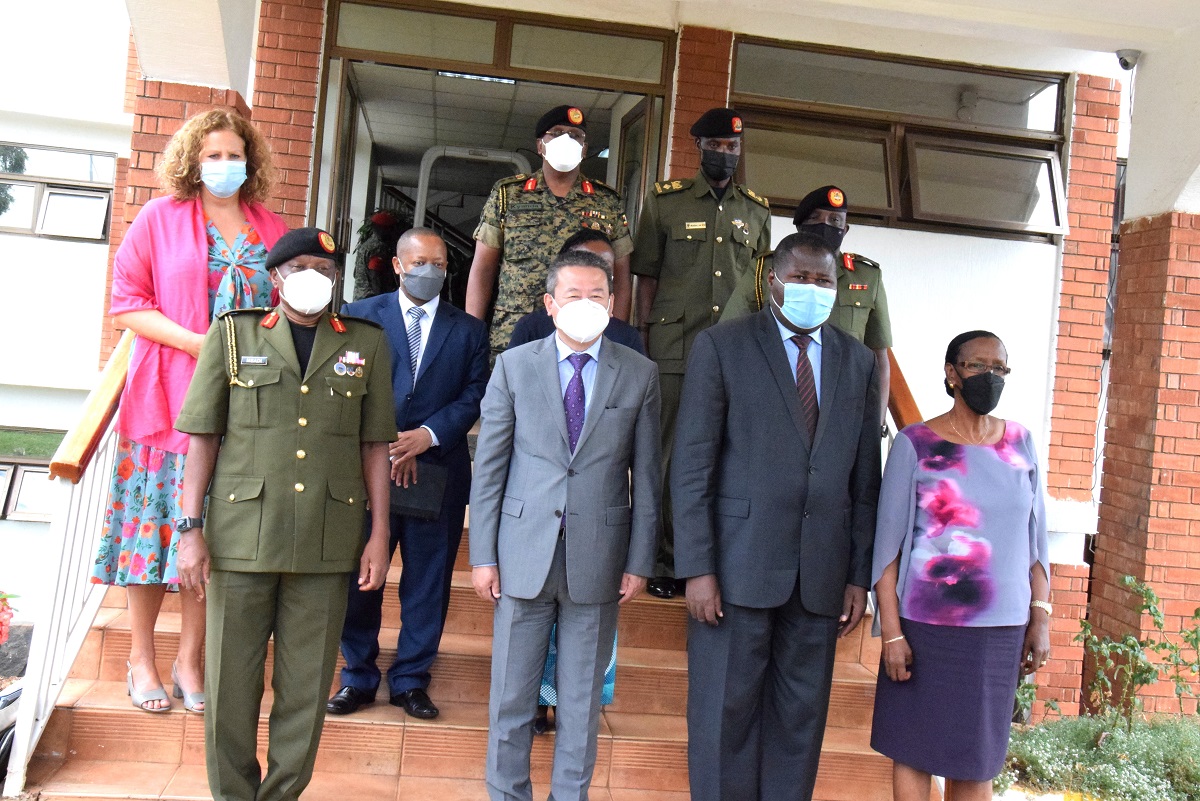 Uganda And Tanzania Sign Memorandum Of Understanding On Cooperation In Defence And Security For The Oil Pipeline Project
May 6, 2022